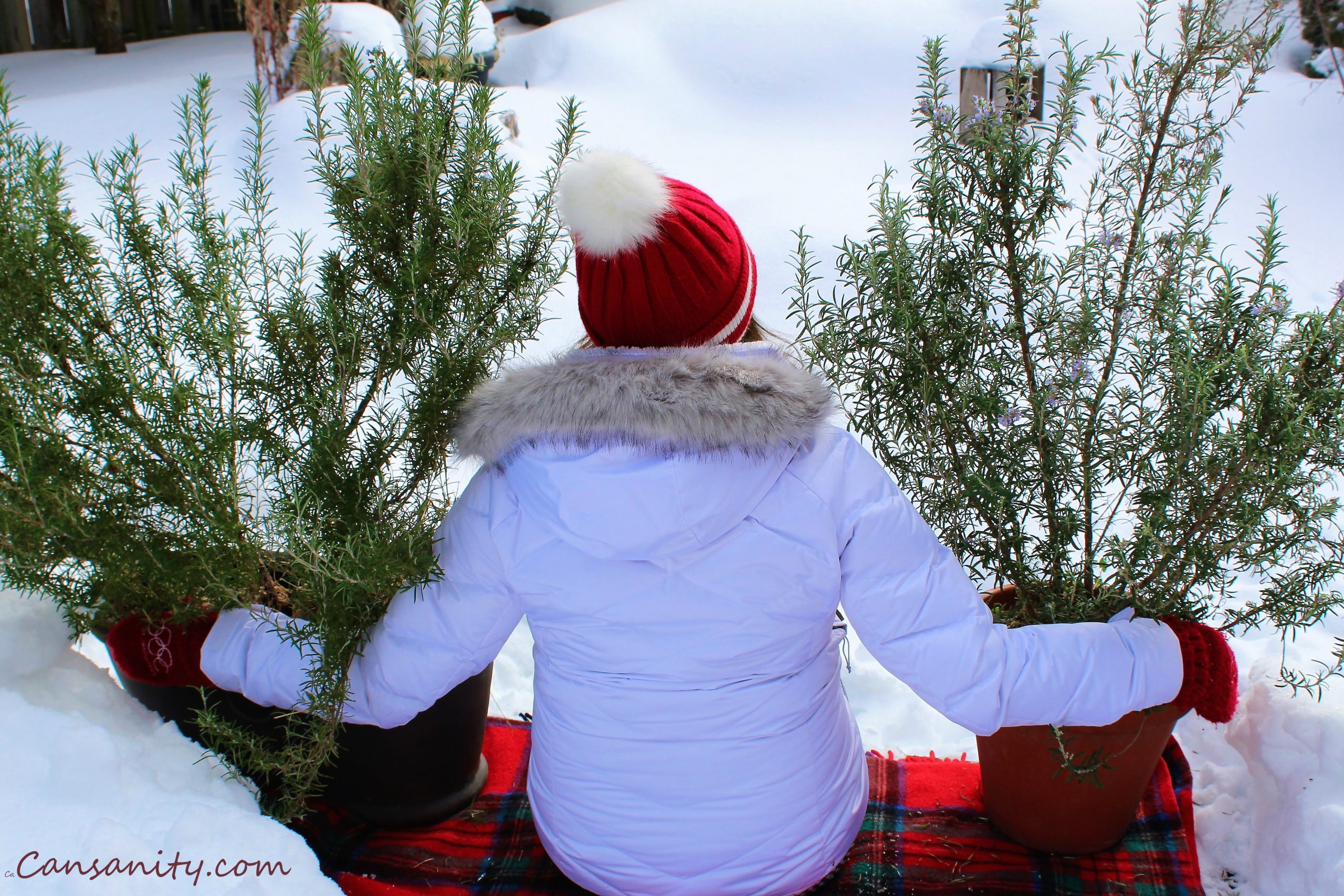 Rosemary is such an amazing herb! It’s part of the mint family, great in sweet and savoury baking, awesome as a part of a rub for beef or chicken, and beautiful in a cocktail or steeped for tea. And it’s healthy for you too! Rosemary contains carnosic acid, a potent antioxidant that is believed to be beneficial for your brain – improving brain health and memory.

In my early gardening years, I would always buy the largest rosemary plant available at the nurseries every spring, grow and harvest for one summer and then discard it. The sad thing is that rosemary doesn’t grow too quickly, and it sure did seem a shame to be tossing it at the end of the season.

If you live in growing zone 8 or above you do not have to concern yourself with overwintering because rosemary can be left out all season in that growing zone, but, for me in zone 6a with my beautiful Canadian winter, keeping rosemary alive outside was not possible. Trust me I tried!

So instead, we have discovered a nifty way to keep that rosemary alive in the winter by moving it either into our garage or into the house for the winter. We have found that we get the best results, though, when we first shock it into dormancy.

In the part of southern Ontario in which I live, we do not have early or harsh winters, which serves us well for keeping this plant. It is very tolerant of cool weather and harsh conditions. We don’t really think about moving our plant inside until it consistently stays below zero, which for our area usually happens sometime in November.

So, every year, we keep the rosemary outside and let it get a frost. Then, we move it to our garage. If the weather turns and gets warm again, we move the rosemary out for some sun. When it gets cold, we move it back in the garage. This pampering can sometimes keep us busy for about a month.

In late December, we get winter and that is when we will leave it in our garage. This year, we left one of our rosemary plants in the garage until the first week of February. We moved it inside when the temperature was going to dip below -20° C. That plant has been in the house for 10 days now, and it is starting to bloom beautiful purple flowers.

Rosemary can live a long time this way, decades in fact, and we have rosemary trees that are five years old. Usually after that they get too large to keep moving them around. So, in anticipation of the end of this shrub, we start another plant from a cutting or just purchase a new one from the nursery.

Rosemary is very drought tolerant and it actually takes in moisture from the air through its needles and keeps itself hydrated in the humid summer months. You really do not need to water your rosemary plant too often. In fact, overwatering will stress the plant and potentially kill it, if its “feet” (roots) are too wet. However, you also do not want to completely dry out the soil.

When we have the rosemary plants in the garage from December through to the end of January, we do not water them. Because the plant is not respiring and the soil was damp when we moved them into the garage, the soil does not dry out.  If we take them outside for some sun when the temperature has risen above zero, we water them then.

So, this year when you are planning your garden, pick up a large rosemary plant, grow over the summer, and follow our lead, keeping your plant alive throughout the winter. When spring arrives, like children, you will be happy to see your rosemary outside basking in the sunshine and enjoying your garden!

If you want to see just how healthy my rosemary stays in the winter, check out this video:

Here are some great recipes using fresh rosemary at Cansanity : 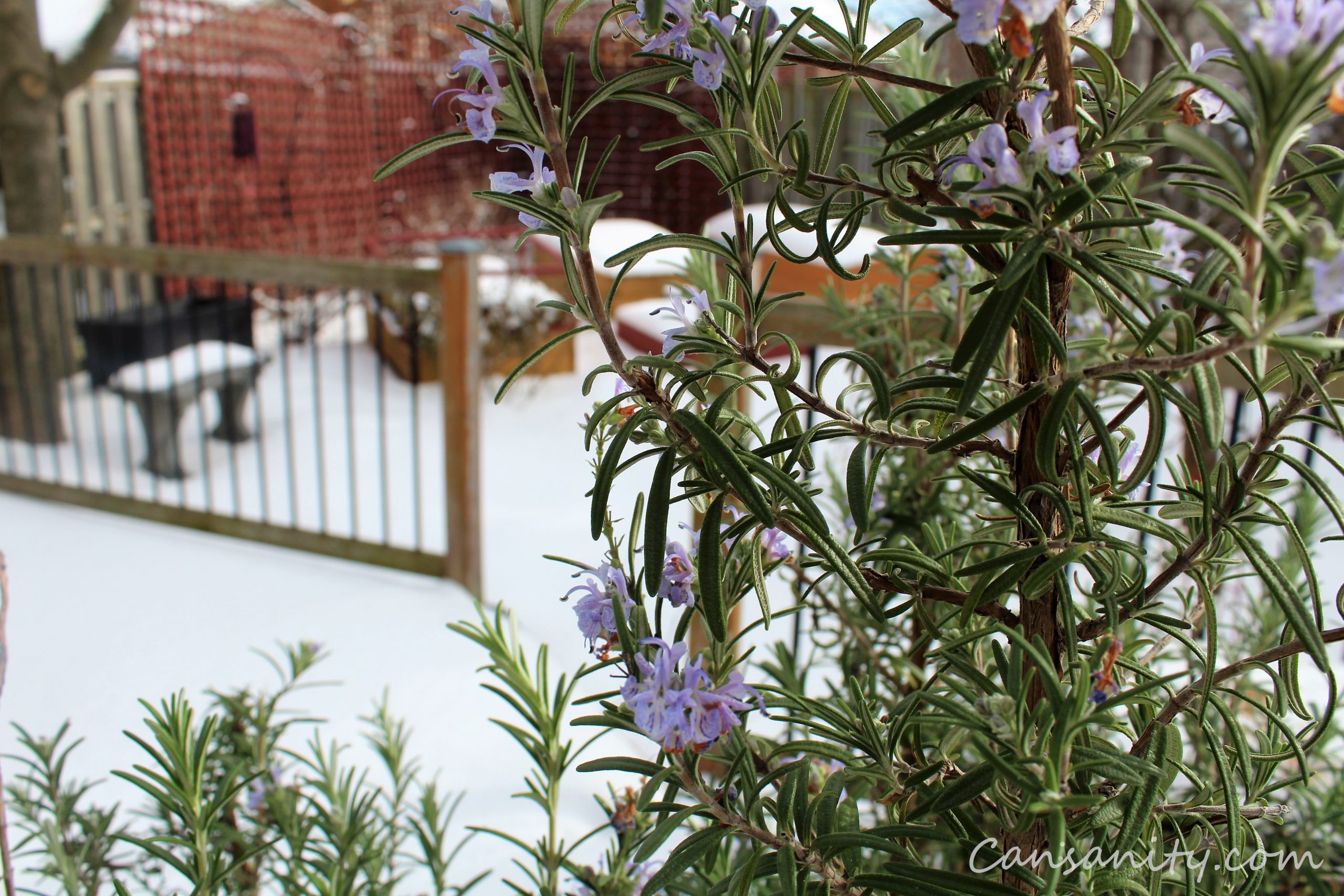 Cansanity provides video instructions about how to grow, preserve and cook food that is grown in your own backyard.  Our blog posts will elaborate on information that is briefly covered in these videos.

Take your first step today towards self sufficiency and achieve peace of mind that you are making a difference in your life, and in the world!